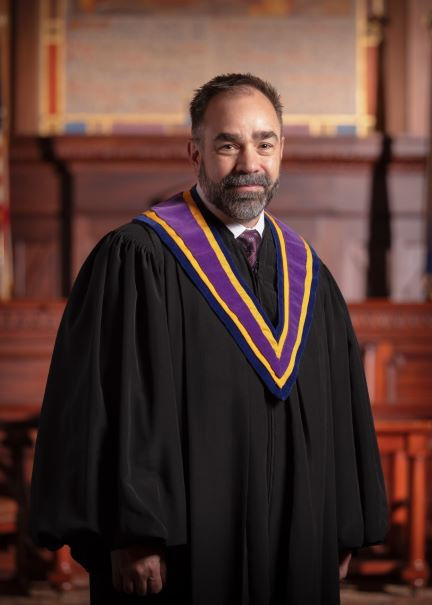 Widener University Commonwealth Law School graduate P. Kevin Brobson ’95 has made no secret of his drive toward public service, citing it as the main factor in seeking election to the Commonwealth Court of Pennsylvania 12 years ago and, more recently, to the state’s highest court. He hopes to continue his efforts toward improving transparency and communication to ensure the judicial system remains open and accountable to the people it serves.

“I can’t say that I accomplished everything I wanted to accomplish during my time as a Commonwealth Court judge and as president judge of that court,” said Brobson. “As a Supreme Court justice, though, I will have more opportunities, working with my colleagues, to address broader access to justice issues. We should never stop trying to improve and innovate. All Pennsylvanians deserve to have faith in a fair and impartial judiciary.”

Brobson’s background as a litigator prepared him for his positions in the Pennsylvania appellate court system, but his legal education prepared him to be a practicing lawyer. “The most challenging aspect of private practice is competition—competition for jobs, competition for clients, and competition to work on the highest-profile cases. While a strong work ethic will give you a leg up, if you do not have good, basic legal skills, you cannot compete at the highest levels. Widener provided a solid legal education in an environment that fostered interaction between students and professors. This experience helped me to better compete in private practice.”

He cites his experiences working with the Central Pennsylvania Law Clinic at Widener Law Commonwealth as particularly noteworthy. “Working with the Pennsylvania Coalition Against Domestic Violence, we helped craft legislation to protect children caught in the middle of bitter custody disputes.” Brobson also served as managing editor of the Widener Commonwealth Law Review and was active in several student bar association events.

Brobson also credits the valuable support he received during his time at Widener Law Commonwealth and beyond. "Having someone invested in your career success to help guide you and encourage you is a plus. I was very fortunate throughout my career—in law school, private practice, and as a judge—to have good mentors and role models.  I have tried to pay that forward throughout my career." That commitment to helping others included serving as a jurist in residence and on the Board of Advisors at the law school.

While Brobson’s legal education helped prepare him to be a practicing attorney, his experiences as an attorney have shaped his judicial philosophy. “For most of my career in private practice, I represented clients who have raised questions about whether their state or local governments are complying with the law. This experience has instilled in me the strong belief that government must be just as accountable to the law as the citizens of the commonwealth of Pennsylvania. Each branch of government has an important and exclusive role to play in the system. To ensure that government works for all Pennsylvanians, this separation of powers must be honored.”