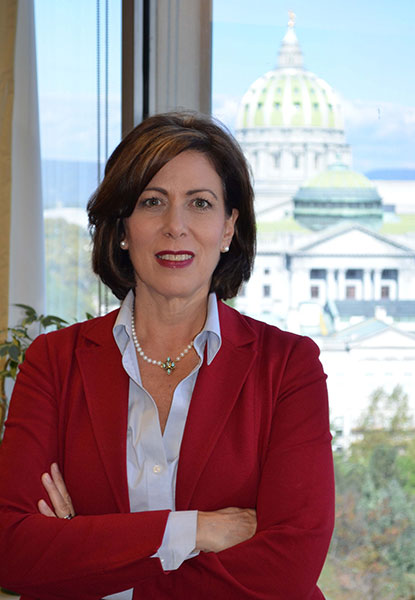 The Honorable Susan E. Schwab is thankful for the second chance that Widener University Commonwealth Law School gave her after she was not admitted in the spring of 1989. Her college grades were excellent, but her Law School Admission Test score was not. She was given the option of enrolling in the Trial Admission Program. She took it, and by August was among the members of the law school’s inaugural class.

The TAP program is offered to applicants who excel in only one of the two required areas for admission – grade point average and the LSAT. TAP students take three short-version law school classes – Contracts, Torts, and Legal Methods – and are offered a law school spot if they achieve a grade point average of 2.3 or higher.

Today Schwab, who is the chief magistrate judge for the United States District Court for the Middle District of Pennsylvania, said that she doubts she would have taken the LSAT again if Widener had simply rejected her.

”I was busy, I was an adult – I would have assumed I just wasn’t a good fit for law school,” she said. “And what a shame that would have been because I love being a lawyer and have had so many wonderful opportunities because of it.”

A native of Wilkes-Barre, Schwab had family in the Harrisburg area and only applied to Widener Law Commonwealth.

“Some people just aren’t good test takers,” Schwab said. “I had been out of college for eight years and was rusty.”

Schwab said that the month she spent in TAP flew by.

“It was intense; we were in class all day and studied every night,” she said. “We all became friends quickly and I still talk to Jim Tressler ’92 all the time – he’s a friend for life.”

“I thought everyone else was smarter than me at the beginning,” Schwab said. “But TAP gave me the experience I needed to know I could handle law school, how to read a case, how to study. I got good grades in all three classes, which really boosted my confidence.”

Schwab, who passed the bar on her first attempt, praised the professors she had that summer, saying they never treated the TAP students as anything less than bona fide law students, saying they demonstrated a real commitment to their students’ success.

“If you are offered a chance for a spot in law school via TAP, take it,” Schwab advised. “TAP is a microcosm of law school. If you do well and like it, you’ll know law school is for you. If you don’t like it or don’t do well, better to find out early.”