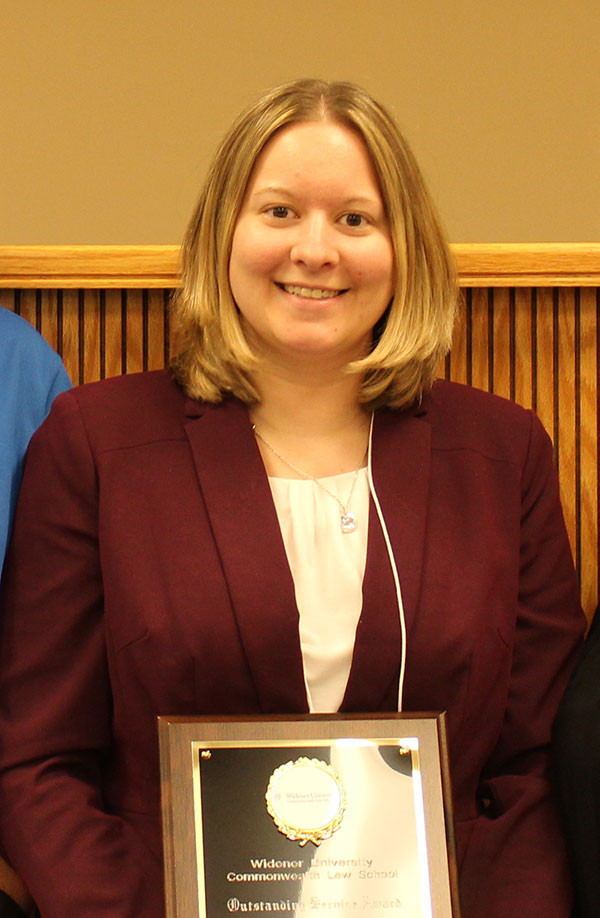 On the morning of her college graduation, Kayla Rost learned that she had one more hurdle to overcome before her dream of attending Widener University Commonwealth Law School in the fall could come true.

“I had really good grades in college, was a pre-law minor, and was in marching band and many other academic and service activities,” Rost said. “I knew I could handle law school, so when I had the opportunity to enter the Trial Admission Program, I took it.”

A native of Cambria County, Rost had wanted to be a prosecutor since becoming active with her college Law and Justice Society and her experience with a mock trial competition. She wanted to stay in Pennsylvania for law school and had chosen Widener for its proximity to the Capitol.

After reading the email from Widener, Rost said she knew immediately what she had to do.

“I graduated that morning, and headed to Harrisburg and the TAP program a few weeks later,” she said.

Rost found the classes to be challenging, but in a good way.

“I got a great introduction to the style of law school – it’s different than college,” Rost said. “Taking Contracts, Torts, and Legal Methods was really interesting.”

Rost says TAP gave her a real boost academically, which led to good grades in her first year classes. This, in turn, landed her with two internships, one with the Pennsylvania Public Utility Commission, working for now Chairman, Gladys Brown Dutrieuille, and the other at the Pennsylvania Board of Probation and Parole.

“Within a year of college graduation, I was getting paid to work in the legal field with Commissioner Brown [Dutrieuille], learning so much about utility law and administrative law,” Rost said.

In her second year, Rost clerked for Pennsylvania Commonwealth Court Judge P. Kevin Brobson ’95, and even had to pass up an opportunity to clerk at the Pennsylvania Superior Court for scheduling reasons.

She returned to work at the PUC in her second year and the PBPP during her third year of law school.

Rost passed the Pennsylvania bar exam on her first try and after graduating near the top of her class, worked as a legal associate at the Champion Law Office, LLC in Carlisle. The owner of that firm, Vincent Champion, graduated from Widener Law Commonwealth in 2001.

Today Rost is a prosecutor in the Bureau of Investigation and Enforcement at the PUC, enforcing the Public Utility Code and PUC Orders.

Rost’s advice to would-be Widener Law Commonwealth students facing the choice of attending TAP is to take it as a learning opportunity.

“Don’t be afraid,” she said. “Use it to your advantage. Instead of viewing TAP in a negative way, I used it as a motivator to excel in law school.”