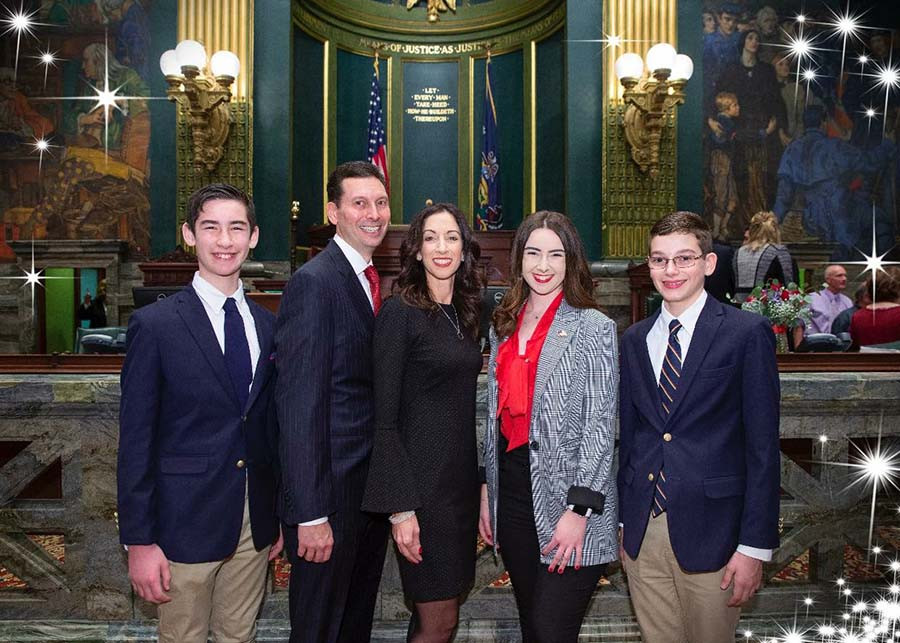 Helping others through public service

People often ask youngsters ‘what do you want to be when you grow up?’ For Megan Martin, she initially wanted to follow in her father’s footsteps and become a doctor.

However, once she hit middle school, she changed her mind after reading To Kill a Mockingbird, a book she says had a profound effect on her. When she started college, it became clear to her which career path she wanted to pursue.

Fast forward a few years later and she applied and was accepted to Widener Law Commonwealth. Her initial legal career goal was to practice family law, and she secured a judicial clerkship with The Honorable Wayne Hummer in Lancaster immediately following graduation. While that experience was wonderful because of the training and experience she received, Martin says she realized that family law was not for her.

Toward the end of her clerkship, WLC notified her that then-Governor Tom Ridge’s administration needed a special assistant. Martin was hired and as a result, she spent seven years serving with the administration in various positions – opportunities she said were thanks to WLC’s Career Development Office outreach to her. It led Martin to find her true calling.

“Working on the Ridge team with such fine people on such important issues sparked and cultivated my desire for a career in public service – to dedicate my work to something much bigger than myself.”

After serving with the Ridge Administration, Martin worked as an adjunct professor at WLC and with the Department of Navy in its Office of General Counsel. Both positions involved teaching future attorneys in legal methods, providing them with the essential skills to succeed in a legal career, including rule-based reasoning, written communication of objective legal analysis, and written and oral advocacy instruction. Those experiences led her to the Pennsylvania Senate, where she has been for nearly a decade. Martin serves as secretary and parliamentarian of the Pennsylvania Senate, becoming the first woman to serve in this capacity since the position was established by statute in 1911.

Martin said she truly enjoyed her time at WLC, learning to think, write and speak as a lawyer. In addition to immersing herself in her classes, she also took part in oral advocacy and serving on the Moot Court Honor Society, where she earned the first-place brief in the east coast region in a national moot court competition. Martin actively served with the Student Bar Association and planned a law student trip to the U.S. Supreme Court. Her efforts in both organizations led to her being awarded distinguished service awards from the Moot Court Honor Society and the SBA.

However, one of the biggest challenges Martin faced while attending school was very personal. Martin’s mother battled a brutal and aggressive form of cancer, which she succumbed to after Martin graduated and began practicing law.

“Seeing her suffer gave me some well-needed perspective during law school about what is important in life – family. I always strived then, and still do, to make her proud and to put my family first.”

She credits Widener Law Commonwealth with giving her a strong foundation to succeed in her legal career in government service, including in her current position with the Pennsylvania Senate.

“I have been blessed to be the recipient of professional development and training throughout my career, and I strive to give the same benefits and opportunities to my team.”

The last year has been challenging for many job sectors due to the COVID-19 pandemic, including the legislature. Until the pandemic hit, most legislative chambers weren’t ready to conduct sessions virtual. However, through her work and leadership, the Pennsylvania Senate was the first legislative chamber in the nation to provide full remote participation of its members during the COVID-19 pandemic. For this work, Martin was honored by the National Conference of State Legislatures.

Martin strongly encourages future attorneys who are looking at law school to consider a career in public service, as it provides limitless challenging and fulfilling opportunities.

“It’s a privilege and a calling to practice law in the context of public service,” she said. “I did not know the path my legal career would take, but I never dreamed that I would serve two presidents, the U.S. Navy, two governors and the Pennsylvania Senate and be the first woman in our state to serve as its secretary-parliamentarian.”

Interview was conducted in Fall 2021.