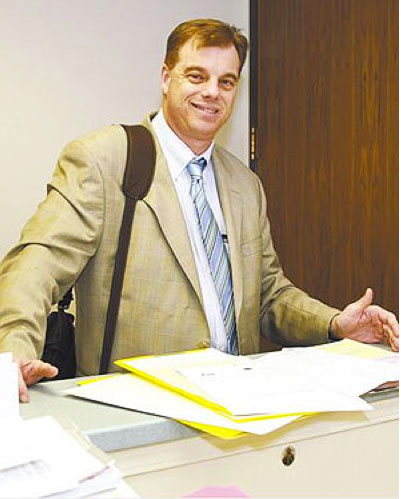 Advocacy Beyond the Courtroom

McPherson graduated from Widener Law, Harrisburg campus, in 1995 and moved to Hawaii the next year. When you hear his voicemail begin with “Aloha,” you know you’re not in Harrisburg anymore. And when you consider that there is an annual average of 5,500 DUI arrests in Hawaii each year, it’s certain McPherson’s phone will be ringing with new clients daily.

For McPherson, it’s not just about representing clients who have made a mistake, it’s also about making a difference in their lives. “I ask clients: If you’re digging yourself into a hole, what’s the first thing you have to do to get out? Stop digging! The longer you dig, the more it costs you. So, we’ll get this problem solved, and then you’ll be able to move on with your life.”

McPherson credits the legal education he received at Widener Law for a large degree of his success. He’s been named a Super Lawyer four years in a row and was appointed by the governor of Hawaii to the ignition interlock task force. He frequently testifies before the state legislature regarding DUI laws and worked on revising the entire DUI statute for the state of Hawaii. He’s even represented cast members from the hit TV show Lost.

“Law school teaches you how to analyze a problem and come up with a solution,” McPherson said. “I liked Widener in particular because it was not stuffed white shirts and a box full of chocolates. It’s innovative, it’s diverse, and it’s a place where people think outside the box.”

"In fact, I give money to Widener Law because I believe that the school is doing such great things, not because I feel obligated to. I think people who go to Widener Law get better value for their dollar than they would at any other school.”

“I’m one of the luckiest people I know,” McPherson said. “My dad worked for a little newspaper, my grandparents on both sides were poor, and now I have the biggest traffic practice in Hawaii. If you said, ‘I’m going to go to paradise,’ I’d say you’ll be living next door to me.”