1. We have your official bio on hand, but is there anything about your background/history you’d like to add?

I was born in Boston, Massachusetts and grew up in Weymouth. Weymouth is on the South Shore and abuts the Fore River Shipyard (Bethlehem Steel – General Dynamics shipyard). My residence is now in York, Pennsylvania.

It is an honor to be nominated by the President of the United States for the position of Commissioner, Federal Maritime Commission (FMC), and then be confirmed by the U.S. Senate. I have been working in the transportation sector and on transportation related matters throughout my career.

2. Your path to law school was a non-traditional one. What informed your decision to enter the law?

It was not a matter so much as “if”, but “when”, I would go to law school. I am an engineer first, by trade. I am a graduate of the Massachusetts Maritime Academy, having earned a Bachelor of Science and Marine Engineering and U.S. Coast Guard License to serve as an Officer in the United States Merchant Marine.

I knew early on that I would become a lawyer. So, before one of my voyages, I bought two LSAT preparation books and studied the books while at sea. I came home from that trip, took a course for the LSAT and applied to law school. Then I shipped out again on a tanker. When I returned from that trip, I was notified that I had been accepted to Widener University School of Law in Pennsylvania. I had not even unpacked my sea bag from that trip— I grabbed a U-Haul trailer, loaded my sea bag and a futon bed—and I drove from Boston to Pennsylvania. It was quite a change. I remember sitting in my first class in a building situated on what seemed to be farm in central Pennsylvania reminiscing that just five days earlier I had been working on an oil tanker in the Gulf of Mexico.

I continued to actively serve in the Merchant Marine throughout law school. During my summer and winter breaks I served aboard government pre-positioning ships in South Carolina; I worked on a tanker delivering jet fuel from Texas City, Texas to Haifa, Israel; and transported liquid-sulfur between ports along the Gulf Coast of the United States.

3. Please tell us a little about your work prior to and during law school. Life in the Merchant Marine is probably quite foreign to most of our alumni (and the legal community at large), so any perspective you can provide would be fantastic. Any good anecdotes?

The U.S. Merchant Marine is the fleet of ships which carries imports and exports during peacetime and becomes a naval auxiliary during wartime to deliver troops and war materiel. In accordance with the Merchant Marine Act of 1936, it is necessary for the national defense that the United States shall have a merchant marine of the best equipped and most suitable types of vessels sufficient to carry the greater portion of its commerce and serve as a naval or military auxiliary in time of war or national emergency.

As a Merchant Marine cadet, I worked in the Fore River General Dynamics shipyard preparing (“breaking out”) vessels for Operations Desert Shield and Desert Storm. Upon graduation from Mass Maritime, I began sailing as an officer in the U.S. Merchant Marine. As a U.S. Merchant Marine Officer from 1992 to 2002, my shipboard experience entailed serving aboard ammunition ships in and around Diego Garcia, a remote coral atoll in the Indian Ocean. I also was an officer aboard car carriers servicing Europe and the Pacific Rim, tanker vessels, and served aboard the U.S. Maritime Administration’s U.S. Ready Reserve Force Fleet.

With respect to my time at sea, I have some good memories serving aboard the SS JAMES LYKES during its last voyage in the mid-1990s. The SS JAMES LYKES was a general cargo vessel that was built in Ingalls Shipyard in Pascagoula, Mississippi in 1960. The ship was loaded in Charleston, South Carolina, and we carried cargo through the Strait of Gibraltar and then on to Tunis, Tunisia - Izmir, Turkey - Alexandria, Egypt - Port Said, Egypt - through the Suez Canal and onto Karachi, Pakistan. We left Pakistan and finished the voyage by anchoring the vessel off the shore of Alang, India in a place called the “bone yard” for scrapping. That trip was quite amazing. I was able to go ashore in every port and witness the local communities and interact with the citizens in each country. When we got to India it took three days of travel by bus, rail, and plane to get from Alang to Bombay. Just seeing the countryside, traveling through the villages and meeting with local residents was really eye-opening. On that voyage, I gave away most of my personal belongings in several of the ports-- soap, gum and toothpaste were popular items; I gave away my sneakers, shoes, belts, flashlights, batteries, baseball hats . . . I often wonder how long it will be before someone like me can again travel that freely and safely in all of those countries.

I am also mindful of the history of the United States Merchant Marine: they provided the greatest sealift in history between the production army at home and the fighting forces scattered around the globe in World War II. One in twenty-six mariners serving aboard merchant ships in World WW II died in the line of duty, suffering a greater percentage of war-related deaths than all other U.S. services. Casualties were kept secret during the War to keep information about their success from the enemy and to attract and keep mariners at sea.

To grasp the role of a U.S. Merchant Mariner, I would encourage folks to see the movie “Captain Phillips” starring Tom Hanks. This is the story of the Somali pirate attack on the MAERSK ALABAMA which occurred off the Horn of Africa in April, 2009. This is the modern day Merchant Marine that I served in as an engineer and which I represented as a lawyer. My union, the Marine Engineers’ Beneficial Association, represents the officers on that vessel. Captain Richard Phillips and some other officers aboard that ship are also graduates of the Massachusetts Maritime Academy. I know these officers—and what they and the crew went through in dealing with those pirates is nothing short of incredible. 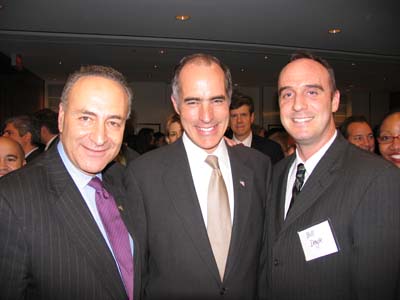 4. The FMC’s mission, vision, and responsibilities are laid out pretty clearly, but what do you see as your role?

The Federal Maritime Commission is comprised of five Commissioners. The Commission has several regulating roles including that of an Appellate Court, albeit in the administrative legal arena. The Commissioners have the responsibility to review and rule on decisions issued by Administrative Law Judges. Each Commissioner has an equally weighted vote and a majority of the same votes cast is the determining factor for a particular matter. One of my goals coming into this position was to move the back-log of cases along. Some cases had been in limbo for seven (7) years. I am an expediter by nature, and to me, waiting 7 years to finalize an order through a federal agency is unacceptable. That said, we are now resolving over 90% of the complaints filed with the Commission within two years. In marked contrast, the case completion for filed complaints was a little over 50%.

5. Please tell us a little bit about your law school experience. How did Widener Law prepare you for your current role?

Widener is a great law school. The faculty is excellent and they are very accessible. In Harrisburg, there really was a focus on government services. A lot of graduates from Widener end up in public service, which is very honorable. In fact, the FMC’s chief of staff is a fellow Widener graduate. Today, it appears that public servants get banged-around unfairly – it can be thankless. During my legal career, I have worked in the private and public sectors. I know I would not have had the opportunities described below, if it were not for Widener.

6. Can you comment on recent, specific issues you’ve addressed as a Commissioner?

I was recently assigned to be part of the U.S. trade delegation for the U.S – China Transportation Forum. I am looking forward to this forum because the global maritime industry is rapidly changing.

I am also focused on President Obama’s National Export Initiative. The export initiative is bipartisan and simple to understand— more exports equals more jobs. The shipping industry plays a critical role in commerce—shipping is the key transportation factor for most imports and exports.

I am equally focused on the rapidly evolving international shipping sector. The Panama Canal expansion is expected to be completed in 2015. This may or may not shift the U.S. inbound (from Asia) trade lanes.

There is a good likelihood the expansion of the Panama Canal will shift the trade lanes for world supply of natural gas. Not long ago the United States was positioning itself to be the world’s largest importer of natural gas. In 2006 there were approximately 50 proposed liquefied natural gas (LNG) import projects in some stage of regulatory review. The U.S. was on the verge of becoming ever more reliant on the Middle East for its natural gas.

That all changed when the independent natural gas producers in the U.S. proved that natural gas could be extracted and produced from shale basins.

Today, the U.S. has not only slashed its imports of natural gas from overseas, but we are on the verge of becoming a major competitor on the supply-side of natural gas through our LNG exports.

The world’s largest market for liquefied natural gas is Asia. As it stands now, South Korea and Japan are the largest importers of LNG. In the coming years, China may be added to that list.

With the Dominion Cove Point decision issued by the Department of Energy in September, the Obama administration has now authorized 6.37 billion cubic feet of liquefied natural gas to be sold overseas. Dominion, located in Maryland, is the first East Coast export project that has been approved and it is the closest terminal to Appalachia’s Marcellus and Utica shale formations. Previously, the Energy Department approved conditional export licenses to three Gulf Coast terminals. These terminals must secure further authorizations from other agencies including the Federal Energy Regulatory Commission.

Once the expanded Panama Canal opens, the distance to ship U.S. natural gas (and natural gas by-products) from the Gulf Coast of the United States to Asia will decrease by 9,000 miles. Only 21 of the existing global fleet of 370 LNG tankers can currently fit through the Panama Canal. None use the Canal.

However, more than 80 % of the tankers will be able to make the passage through the Canal once the widening is complete. The U.S. will be competing with Australia, Russia, East Africa and the Middle East as a natural gas supplier for Asia. The development of U.S. natural gas resources, together with the Panama Canal Expansion, will have a transformative impact on the U.S. energy and transportation landscape, helping to improve our energy security while spurring economic development and job creation around the country.

Today, mid-2013 (as the world climbs out of the Great Recession of 2008-2009), there is overcapacity in the world’s container fleet, thus the carrier (box) rates are at historic lows, yet more ships are still being ordered. In the United States, every port is preparing for larger ships and perhaps significant shifts in cargo volumes.

Interestingly, the new generation of vessels that are being built right now in Asia, will be too big to fit through the Panama Canal after the expansion.