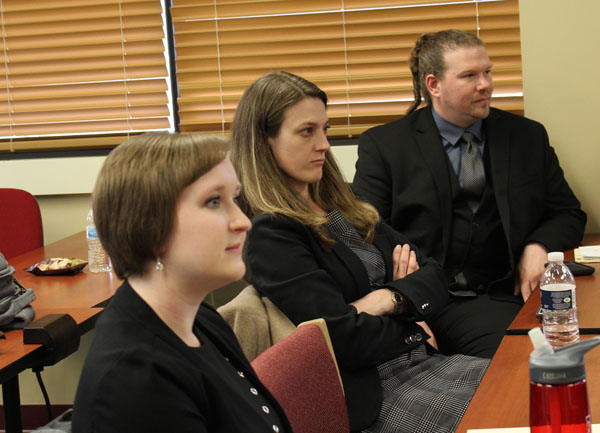 Law students from Widener Law Commonwealth and Penn State Dickinson Law School got a chance to show off their transactional law skills on February 22 in the Mid Penn Invitational Transactional Law Competition.

The competition, hosted by the Business Advising Program at Widener Law Commonwealth, was the last stage in a two-month simulation designed to give law students a hands-on experience developing and honing transactional legal skills.

Each law school was represented by two teams that drafted and prepared documents negotiating the purchase of a fictional bottle company. The students drafted portions of an asset purchase agreement based on facts given to them by their fictional client. On February 22, the teams met to negotiate their final deal. Lawyers in Harrisburg and Wilkes-Barre donated their time to give feedback on the documents and judge the final negotiations.

The competition was generously sponsored by Mid Penn Bank. Rory Ritrievi ’98, the president and CEO of Mid Penn Bank, is a member of the advisory board for Widener Law Commonwealth’s Business Advising Program.

“The competition gave me the opportunity to learn how a merger and acquisitions attorney drafts an asset purchase agreement and how to negotiate one on the terms in the agreement,” said Jerry Kincel, a third-year student on the team.

All of the Widener Law Commonwealth students participating in the competition are enrolled in the Business Advising Program. The program allows students to work toward earning a certificate that equips them to advise small and midsize businesses, as well as entrepreneurs starting businesses.

“The most valuable thing I learned during the drafting and judging process was how important every word choice in a legal document is,” said Nicholas Platt, a fourth-year evening division student. “Ambiguities, whether intentional or unintentional, make huge differences and have lasting impacts.”

Widener Law Commonwealth students were coached by Julia Coelho ’08. Coelho is a practicing attorney at McNees Wallace and Nurick with a focus in healthcare and corporate law.

Students from both law schools received one academic credit for participating in the competition.