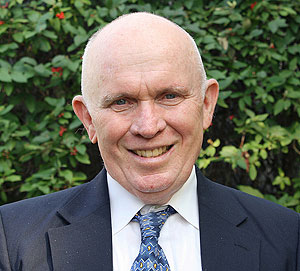 Donald A. Brown, scholar in residence at Widener University Commonwealth Law School, recently became the first American to be awarded the prestigious Avicenna Prize for excellence in climate change ethics by the United Nations Educational, Scientific, and Cultural Organization (UNESCO).

The prize is awarded every two years to an individual or group for outstanding achievements in the field of ethics in science. The award ceremony took place as part of the 40th Session of UNESCO’s General Conference, at UNESCO Headquarters in Paris.

For four decades, Brown has worked to enhance public understanding of the ethical obligations of governments, organizations, and individuals to respond to climate change, while increasing public understanding of the ethical problems with arguments made by opponents of climate change policies. Brown, the first American to win the award since it was established in 2003, said he hopes the honor will heighten global attention on climate ethics.

“Given there is little hope of preventing catastrophic climate change unless citizens and governments understand the ethical indefensibility of the arguments made by opponents of climate policies, a focus of my work, I am extremely happy with the award,” said Brown. Brown received a medal with an image of Avicenna, the 11th century Persian physician and

“The entire Widener Law Commonwealth community is thrilled for Scholar in Residence Donald Brown and counts him among the university’s most distinguished faculty members,” said Christian Johnson, dean of Widener Law Commonwealth. “This award recognizes - at the highest international level – Brown’s extraordinary body of work bringing to light this critically important issue.”

Brown, who joined Widener Law Commonwealth in 2012, has taught at a number of universities around the world and lectured widely on climate ethics in 38 counties. He is the manager of the website Ethics and Climate, which was recognized by CNN and Time Magazine in 2008 as one of the top 15 websites in the United States on environmental issues. Brown has worked throughout his career to promote an international understanding that – more than any other environmental problem – climate change requires governments and people around the world to respond to it as a moral and ethical issue.

Brown also has served as an environmental lawyer for the states of Pennsylvania and New Jersey, and as program manager for U.N. organizations at the U.S. Environmental Protection Agency’s Office of International Environmental Policy, where he represented EPA negotiating sustainability issues at the U.N., including climate change, international water issues and biodiversity.

Brown has authored or contributed to over 100 publications on environmental and sustainability ethics and law, including his most recent book, “Navigating the Perfect Moral Storm, Climate Ethics.”